Grizzly, the day after

The OpenStack Grizzly release of yesterday officially closes the Grizzly development cycle. But while I try to celebrate and relax, I can't help from feeling worried and depressed on the hours following the release, as we discover bugs that we could have (should have ?) caught before release. It's a kind of postpartum depression for release managers; please consider this post as part of my therapy.

In OpenStack, we invest a lot in automated testing, and each proposed commit goes through an extensive set of unit and integration tests. But with so many combinations of deployment options, there are still dark corners that will only be explored by users as they apply the new code to their specific use case. We encourage users to try new code before release, by publishing and making noise about milestones, release candidates... But there will always be a significant number of users who will not try new code until the point in time we call "release". So there will always be significant bugs that are discovered (and fixed) after release day.

The best point in time

What we need to do is pick the right moment to "release": when all known release-critical issues are fixed. When the benefits of waiting more are not worth the drawbacks of distracting developers from working on the next development cycle, or of abandoning the benefits of a predictable time-based common release.

The trick, then, is to pick the right length for this feature-frozen period leading to release, one that gives enough time for each of the projects in OpenStack to reach this the first release candidate (meaning, "all known release-critical bugs fixed"), and publish this RC1 to early testers. For Grizzly, it looked like this: 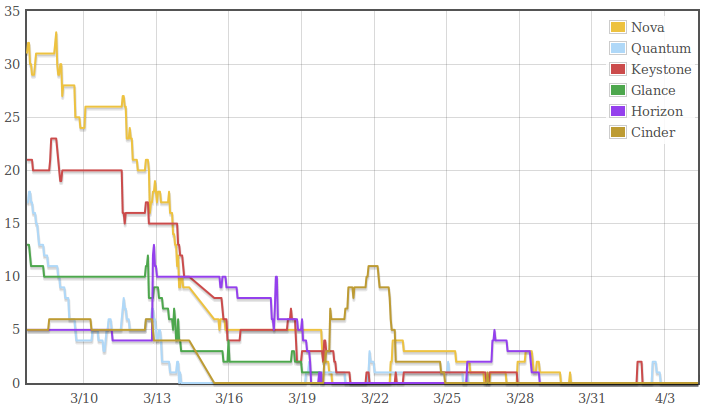 This graph shows the number of release-critical bugs in various projects over time. We can see that the length of the pre-release period is about right: waiting more would not have resulted in a lot more bugs to be fixed. We basically needed to release to get more users to test and report the next bugs.

The Grizzly is still alive

The other thing we need to have is a process to continue to fix bugs after the "release". We document the most obvious regressions in the constantly-updated Release Notes. And we handle the Grizzly bugs using the stable release update process.

After release, we maintain a branch where important bugfixes are backported and from which we'll publish point releases. This stable/grizzly branch is maintained by the OpenStack stable maintenance team. If you see a bugfix that should definitely be backported, you can tag the corresponding bug in Launchpad with the grizzly-backport-potential tag to bring it to the team's attention. For more information on the stable branches, I invite you to read this wiki page.

Being pumped up again

The post-release depression usually lasts a few days, until I realize that not so many bugs were reported. The quality of the new release is actually always an order of magnitude better than the previous releases, due to 6-month worth of improvements in our amazing continuous integration system ! We actually did an incredible job, and it will only get better !

The final stage of recovery is when our fantastic community gets all together at the OpenStack Summit. 4 days to witness and celebrate our success. 4 days to recharge the motivation batteries, brainstorm and discuss what we'll do over the next 6 months. We are living awesome times. See you there.