Yesterday, as the final conclusion of the 6-month "Havana" development cycle, we released the latest version of OpenStack, the 2013.2 version. It's now composed of 9 integrated components, which saw the completion of more than 400 feature blueprints and the fixing of more than 3000 reported bugs.

As always, it's been an interesting week for me. Not as busy as you'd think, but lots of hours, day or night, spent frantically checking dashboards, collecting input from our fearful technical leads, waiting for a disaster to happen and pushing the right buttons at the right moment, finally aligning the stars and releasing everything on time. Yes, I use checklists to make sure I don't overlook anything: 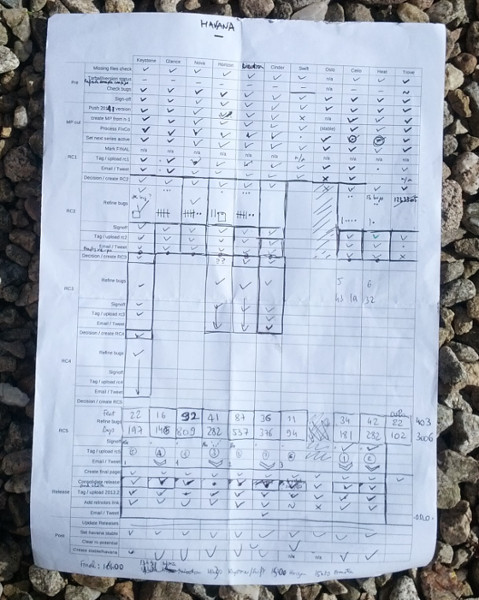 Even if I have plenty of free time between those key hours, I can't concentrate on getting anything else done, or get something else started (like a blog post). This is why, one day after release, I can finally spend some time looking back on the last stage of the Havana development cycle and see how well we performed. Here is the graph showing the number of release-critical bugs logged against various components (those observing the common feature freeze) as we make progress towards the final release date:

Personally I think we were a bit late, with RC1s globally landing around October 3 and RC2s still being published around October 15. I prefer when we can switch to "respin only for major regressions and upgrade issues" mode at least a week before final release, not two days before final release. Looking at the graph, we can see where we failed: it took us 11 days to get a grip on the RC bug count (either by fixing the right issues, or by stopping adding new ones, or by refining the list and dropping non-critical stuff). Part of this delay is due to stress recovery after a rather eventful feature freeze. Part of it is lack of prioritization and focus on the right bugs. The rest of the graph pretty much looks like the Grizzly one. We were just at least one week too late.

We'll explore ways to improve on that during the Icehouse Design Summit in Hong-Kong. One solution might be to add a week between feature freeze and final release. Another solution would be to filter what gets targeted to the last milestone to reduce the amount of features that land late in the cycle, to reduce FeatureFreeze trauma. If you want to be part of the discussion, join us all in Hong-Kong in 18 days !