A few days after an intense and fruitful OpenStack Design summit, I just recovered enough from jet lag to deliver my impressions in written form. We put a lot of smart people into rooms to discuss various subjects hastily defined while we were busy releasing Essex... and the magic worked again: open collaboration between developers from competing companies, strong but always polite technical discussions, lots of decisions, teams of developers with common interests forming, duplication of effort avoided...

It's clear that the format (mostly inherited from Ubuntu's Developers Summits) works very well in our open innovation project: everybody comes with a plan that is open to modifications and the developers are empowered with decision making.  This makes the design summit sessions very appealing to developers, turning them into advocates of our development model in their companies, removing any barriers to contribution that could be left. Being part of the OpenStack community is just pleasant !

However this edition was a bit different from previous ones. There were a lot of signs that our community is maturing. With OpenStack growing, developers can no longer follow every session and give their opinion on every subject: they have to pick their fights, and trust the other developers to come up with the right design in sessions they can't attend. So sessions had a lot less advice-giving people and a lot more people actually signing up to do work. The topics were much more deployers-oriented and much less about changing to the latest shiny stuff. Even less glamorous sessions like bug triaging, documentation, internationalization or stable branch maintenance saw a lot a participants present, and signing up to help.

People realized that OpenStack is here to stay, and that strategic contributions are necessary for it to reach the final stages of its long-term world domination plans. When did that switch happen ? A graph recently published in the community newsletter shows the change happening a few months into Essex: 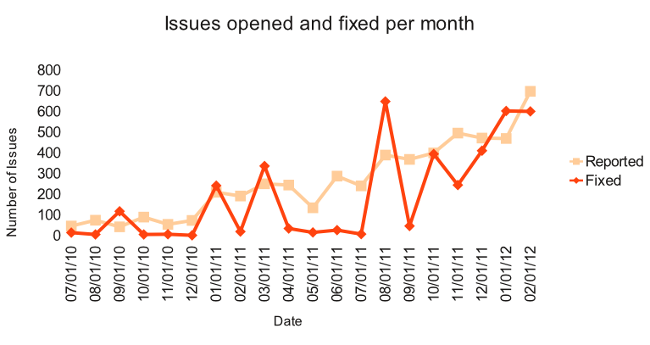 As you can see, people used to care about fixing bugs in spikes around release times. But starting around November, 2011, we see the bugfixes curve starting to follow the bugreporting curve more closely.

After the Diablo release I advocated for companies to put their money where their mouth is and start contributing strategically to OpenStack. I'm happy to see that it happened during the Essex cycle, and that the awesome Design Summit we just had confirms that trend.